While touring around the Isthmian Ar 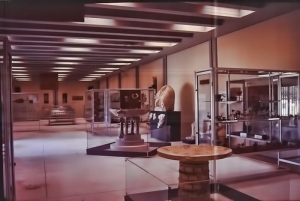 chaeological Site, don’t forget to visit the Museum standing nearby.
The Isthmian Archaeological Museum was built in 1970 by the Greek architect Pavlos Mylonas and opened for visitors a few years later, in 1978. It consists of two chambers, where priceless archaeological remains and cultural relics of the ancient greek civilization are demonstrated; special findings from the excavations of Isthmia and Kehrees- the second most important port in Ancient Corinth.

The exquisite exhibits consist of cultural relics from the Ancient Temple of Poseidon and Palaemon, the Hellenistic site of Rahi and the Ancient Port of Kehrees.

One of the most outstanding findings, is the wooden gate of the Temple of Isida in Kehrees, a precursor of the European vitro art- that is, colorful vitro pieces of glass featuring birds, fish, plants and human figures, such as Homer and Platon.In addition, there is a superb marble parirhanterion (a type of basin used for the ritual washing of hands ) from the Temple of Poseidon, dated back to the 7th century B.C., Corinthian tiles, Isthmian plaques and a fine collection of ancient weapons and war helmets.